Posted on March 5, 2015 by lensaddiction 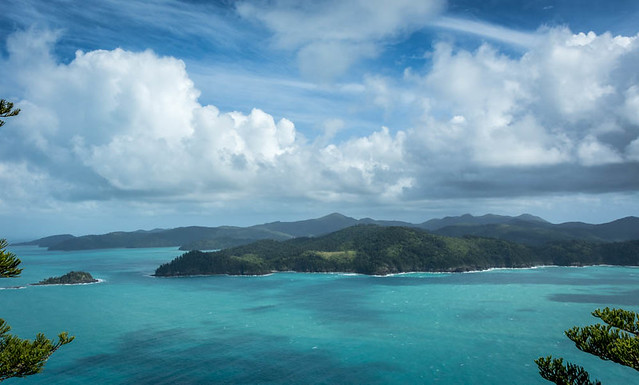 So many people commented on the colour version of my March One Four Wk 1 image that I got my act together and processed this image.

The third day of the conference was planned for activities, both of which involved a boat ride.  After pointing out that no one wanted me there, vomiting the entire way, dispensation was granted and the day was mine to enjoy!

So WHY did I decide to load up 5kg of camera gear (inc tripod hand carried), and in 30+deg temperatures and around 90% humidity (and this was 7am) decide to climb up to Passage Peak – the highest point on Hamilton Island at 900+ m above sea level.

Well the image above is the reason why really – this is processed in LR only, and NO COLOUR ADJUSTMENTS HAVE BEEN MADE –  beyond a small bump of vibrance.  This is how blue the sky was and how green the sea really was.  It was amazing.

I have added an ND grad filter over the clouds as I wanted some more texture and tone in them.  The grad is set to -41 exposure so the sky tone might be a bit darker as a result –  I need to figure out how to balance getting the extra detail and tones in the clouds with a lower exposure and fixing the slightly weird thing it can do to the blue colour of the sky.

(Katie if you are reading this, I also did the trick with the highlights and shadows and then adj my blacks and whites, it worked a treat just to perk the image tones right up !)

There was a storm blowing in and it was extremely windy, I had to hold my tripod steady as there was no flat ground at the lookout, only large round rocks.  Because of the wind I did not stay too long and didn’t spend as much time as I normally would have trying to capture the essence of the place.  This was shot with my UWA 10-22 lens to do justice to the sheer scale of the view.

The walk was supposed to take around 2 hours.  It took me 3 1/2 – partly cos I had to stop for rests a lot – it was REALLY HOT – and partly cos I stopped to take photos along the way, and chat to some other walkers.

Getting to the top was the hard part, it was straight up about 200m with just lots and lots of really big stairs and steps.

It was hard work and I was exhausted for the rest of the day, but being able to take home an image like the one above, I think it was worth it.

Would you agree?  All comments and feedback welcome!

20 Responses to View from Passage Peak