Dead Girl On The Train Tracks

Posted on January 6, 2017 by lensaddiction 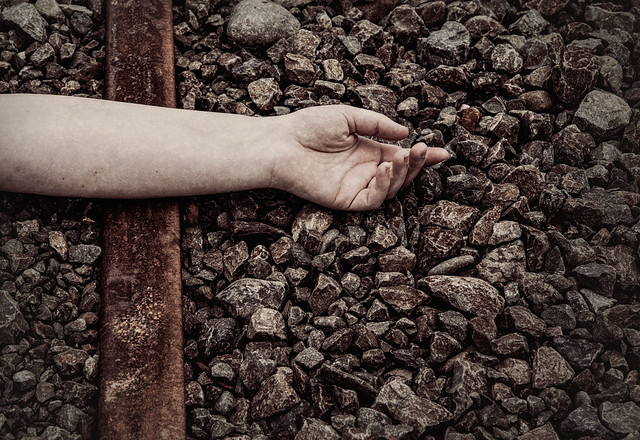 Recently I spent three days in Kaikoura, to visit a friend and to help out the economy up there.  2 months ago the town was cut off completely by a massive earthquake causing slips that closed the three roads into the town, and also the main freight railway line.

Two roads are now open, but SH1 from the north is closed, and the railway lines are completely munted – it wasn’t safe to stop and take photos of the damage but here is as far as you can go – I have stepped around the safety barrier to get this shot – the road is closed with a small slip, and the rail line has been cut away to give access to the beach. 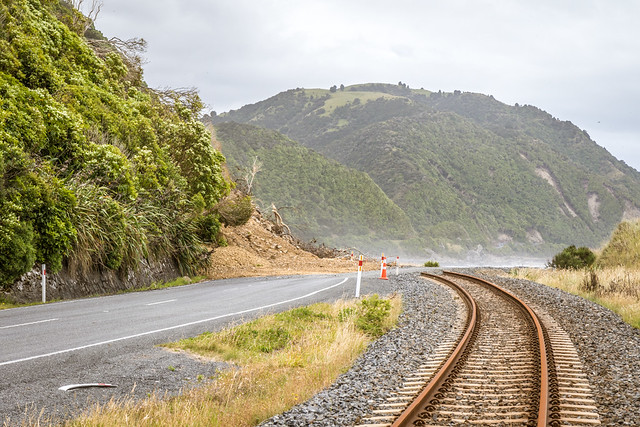 The second day I was there the weather was overcast and grey (it was the day I took the above shot) so I decided to take the opportunity for freely available access to train tracks that I normally wouldn’t have – its illegal in NZ and of course, not safe at all normally!

After spending an hour or so crawling around taking photos, I decided to have some creative fun, and do a Dead Girl On The Train Tracks image.

Luckily I had taken my remote with me, so was set up for wireless shooting, found a nice spot, picked up all the rubbish and distracting elements, lay down on my jacket (the rocks were *very* sharp and pointy and experimenting with shooting.

I really like the simplicity of the story this is telling, its been processed in Topaz Texture effects for a dark gritty process that for me, suits the image – it adds a mottled effect on the skin which says to me “dead body” rather than “live girl” – having never seen a dead body in this way, I can only assume!

The one thing I do regret now is not doing it where the boards are to make it more obvious that the metal rail is a train track – if I didn’t tell you it was one, would you still get that it was from the image?

A slightly dark and macabre image that was a lot of fun to shoot and process – specifically aimed for a very simple but hopefully strong image that tells its own story – what does it say to you?

5 Responses to Dead Girl On The Train Tracks